Kyo Usui [烏 水 匡 ] is the head of the Tengu clan and a powerful demon. He is deeply in love with Misao Harada, who is the current Senka Maiden. He has been engaged to her ever since their childhood and when they reunite after ten years of separation, they begin a romantic relationship. At the end of the series, he and Misao marry followed closely after the birth of their first-born child.

His natural eye color is never officially revealed, but corresponds with the plant or flower featured in the cover art. When he is in Tengu form, his eyes are red. When he is in his true form, he has black wings, long black hair, and a crow's beak mask. He tends to wear a black kimono while in the Tengu village. When he teaches at Misao's school, he wears glasses. He is never seen without the ring that Misao gives him. It was originally intended to ward off girls wanting his affections, but it's obvious that it means a lot to Kyo and represents his loyalty to Misao.

He is considered a very handsome man.

Kyo is a known gentleman, and often makes polite remarks and gestures towards Misao. Kyo is also over protective as he is understanding when making his point, but also gentle and caring. Yet, he also has a perverted side and can become slightly cruel sometimes when healing Misao. That said he would sacrifice himself for her, and almost does just that during his fight with Shuhei. He is always seen as protecting his clan, however he says to his clan that his 'justice' is due to his wanting to have Misao in his life in order for the clan to prosper. He refuses to do anything that can cause her harm. When he was on the verge of dying, and the only way to live was to embrace Misao, he refused so she would not be hurt, but after a while of wanting to live with his love, he embraced her. But then Misao recieves such powers which she alone can not control: such as on a fireworks display she does something she did not intend to do. In the end, was saved by Kyo. Kyo will always save her in order to keep his precious love alive.

"I meant for him to be around 20...But, in his role as a teacher (although he might not be old enough to be one) he looks older, so I couldn't bring myself to state his age. He was meant to be a very different character, but I was forced to cut pages and he turned out to be not a bad character at all."

Kyo lived in a traditional Japanese mansion next door to Misao's house. Kyo was isolated from humans until he was ten years old due to being a demon-monster, it was at this time when he met Misao. Since Misao has the ability to see demons, they were often bothering her. Kyo took the role as her protector and became her best friend, even though he shrugged off her overly friendly gestures at times and went to study. He would often play with Misao as a child, and she constantly clinged to him. Kyo quickly fell in love with Misao and decided that he wanted to marry her. However, only the leader of a clan is allowed to marry the Senka Maiden. Knowing his older brother, Sho, was supposed to marry her, being the eldest son and original heir to the clan, Kyo decides to leave Misao's side in order to surpass Sho, so he would be able marry her and keep his promise. Before departing, he made a promise to come back and marry her as the head of his clan.

Misao is the girl he used to play with as a child. She is the first human he ever came into contact with, and although he tends to get embarrassed by her, he is willing to do anything to protect her, even if it means risking his life. As a child, he quickly fell in love with her scent and told his father that he wished to marry her. However, when he learned that Sho was due to marry her because she is the Senka Maiden and only the head of the clan can marry her, Kyo left Misao for ten years to surpass Sho so he could marry her. Misao initially thought that Kyo wanted to marry her because she is a Senka Maiden and would bring prosperity to his clan, and turns to accept this fate. A year after reuniting, Misao becomes pregnant with his child. Kyo is happy of the news and they decide to get married after the birth. However, upon learning that she will die if she has it, he tried to force her to abort it, but she refused. Eventually, Kyo comes to love the baby, after she tells him that the baby loves her. After giving birth to their son, Sou, Misao miraculously survives. Soon after, Kyo marries Misao.

Sho is Kyo's older brother. He was originally the heir to the Usui clan but once the clan realized how cruel he was, they disinherited him and passed the title of head of the clan to Kyo. Sho now hates Kyo, who was made the head of the clan and how their family prefers Kyo over him, but never seems to understand why the clan disapproves of him. He called Kyo "the spare tire" or "back-up plan". Kyo has always tried to make sure Misao stays away from Sho ever since he saw Sho slap Misao across the face for making him a mud pie when they were children. Sho ends up dying in battle against Kyo. Before dying, he told Kyo that he will expect something he never anticipated with Misao, implying that he read the final pages of the Immortal Fruit Record (Senkaroku).

Shuhei is the younger brother of Kyo's best friend, Tadanobu Kuzunoha. He is a fox demon who is after Misao to take her as his bride. He and Kyo fight for Misao's love and Kyo ends up killing him.

Tadanobu is Kyo's childhood friend. They met completely by accident, and formed a friendship based on their shared love of porn along with the fact that there was no one else their age to relate to. He allowed his younger brother Shuhei to beat him when they fought for the leadership of the Kitsune Clan, because he never wanted to fight his best friend. After Kyo killed Shuhei, Tadanobu became head of the Kitsune Clan. He was forced to challenge Kyo for Misao, but just before Kyo almost killed him, Misao saved Tadanobu by slitting her wrist and letting her blood drip into his mouth.

They are Kyo's eight daitengu, and Kyo's trusted advisors and protectors. They are some of the few demons who knew about Kyo's relationship with Misao before they embraced. All of them have some tie with Kyo: Sagami and Hoki's parents were part of the previous head's (Kyo's father, Yoh) daitengu; Buzen had a crush on Yuri, Kyo's mother; Zenki grew up as Kyo's adopted "brother" in the orphanage Hiyokuin; and Taro, Jiro, and Saburo had been brutally "trained" by Sho, Kyo's brother, before Kyo took them in. Sho was the eighth member of the daitengu before he attacked Misao and was imprisoned in the village.

Yoh is Kyo's father. Kyo has an estranged relationship with Yoh after he stepped down as clan head and left in the middle of the night, never to be seen again the night his mother Yuri died. According to Misao, Kyo didn't want to believe that Yoh had killed his mother, but was truly disheartened that his father would not confide in him the truth of the situation. After Yoh returns and tells Misao the truth of that night, Kyo comes to peace with it. When Yoh prepares to leave again in the middle of the night, Kyo shocks him by abruptly comparing their heights, noting that he has surpassed his father. Kyo then wishes him safety wherever he has planned to go, but feels no urge to ask him to stay.

Sou is Kyo‘s and Misao's son. He was born in the final chapter. He is the current heir to the Tengu clan. When Misao discovered that she was pregnant and Kyo was happy of the news, but after learning that Senka Maidens will die in childbirth, he asked her to abort the baby, but she refused. Although Misao told him that she loves the baby, Kyo said he could never love a child that would cause her death. However, after learning that the baby is a boy and it loves Misao, Kyo comes to care about the baby, whom they decide to name Sou. After a difficult birth, Misao miraculously survives, but lost most of her ability to walk. As a result, Kyo blames Sou, but feels ashamed for taking his anger out on his son, implying that he does not blame Sou, but himself for causing Misao's disability. While it is said that Kyo dotes on Sou, Sou complains that Kyo is always strict with him and loves Misao more than him. 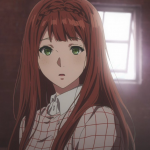 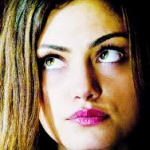